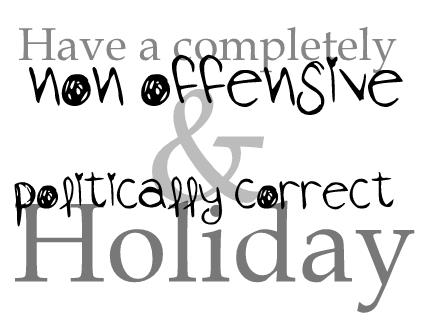 It’s the holidays. Corporate offices are festive this time of year, throwing “ugly sweater” events and lavish Christmas parties. People are signing their emails and memos with a cheery “Merry Christmas!” and ending conversations on similar notes before eagerly starting their vacations.

But in an increasingly globalized working landscape, we are now bringing in employees from all over the world. And with this rich ethnic intermingling comes introductions of new cultures, and new traditions.

It is an almost global constant in every culture to have some sort of winter celebration. It is the start of a new season, the alignment of a solstice, or for one reason or another some interval of change. So regardless of your background, there’s a reason to party.

So, why all the fuss over what to say? Why does HR always have to remind us that it’s “Happy Holidays” and not “Merry Christmas?” All this not potentially offending anybody is starting to become offensive itself, right?

And let’s not even get started on the super-uptight regulations from some that purport to even stamp out “Happy Holidays” in case of upsetting someone whose traditions do not include a celebration this time of year. Really? Is there someone so stern as to NOT want a party, no matter the reason?

Why do we say “Happy Holidays?” It shouldn’t be because HR told us to. It shouldn’t be because we fear offending someone. Rules and fear are not the meaning of the season. As said before, no matter why you’re celebrating, you just are. No matter the tradition, you’re festive. So don’t let something like “don’t do this or that” or “I hope I’m not speaking out of turn” be your motivations.

Instead, your motivations ought to be because of the spirit of the party, because you wish to acknowledge and spread the festivities to others that you say “Happy Holidays.”

Say “Happy Holidays” because there are purportedly 29 other traditions holding celebrations this year, 29 other reasons to party, and even if you don’t know which of those reasons why another person is partying, you still wish upon them good cheer.

While saying “Merry Christmas” to somebody with that intent may still suffice, it’d be like asking a friend why today is special and their responding with some useless trivia anniversary — instead of what the day is to you, your birthday. Yes, both answers are true, but it’s not quite the same.

So don’t disregard someone else’s party just because you’re having a good one yourself. Say “Happy Holidays” because everyone has a right to celebrate.